Published in Blog by Tassos Marinos on Thursday, 04 May 2017 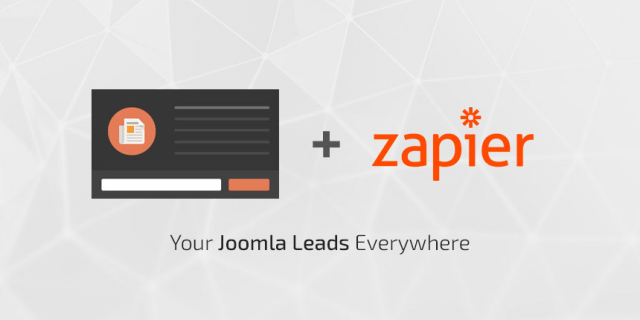 The latest feature release of Convert Forms contains a new characteristic called JSON-API. As all of the APIs out there, it is responsible for providing authenticated data to third-party services. What this means, in plain words, is that your Convert Forms can now securely share data with other services!

Of course you might be wondering what good is this to you if you are not a developer? And it would be a valid question a few years ago but not anymore! That's because a great service called Zapier can now act as the middleman to connect your Convert Forms data with over 500 popular apps!

How does Zapier work

To put it simply, Zapier provides a user-friendly way to create connections from one app to another with what they call, triggers and actions. Each connection is called a Zap and it consists of one trigger and at least one action. 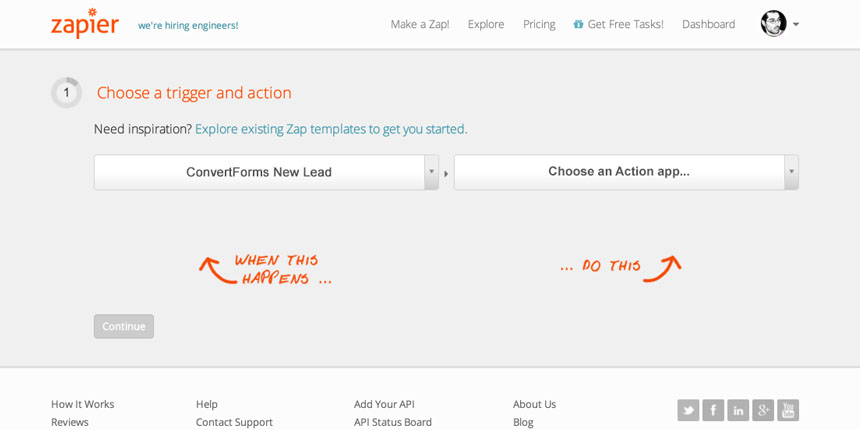 Zapier has a FREE Plan which gives you 5 simultaneous Zaps running every 15 minutes. The FREE plan is quite ok for small scale operations and if you want to create more Zaps as you get accustomed to it, there are a lot of options for upgrading depending on what you need.

A Zap with Convert Forms

The Convert Forms App on Zapier is in BETA stage and because of this, for now, you can only use it with an invite.

For the time being, there is only one trigger available for the Convert Forms App and this trigger is for every New Lead. This means the following steps will occur:

It is also important for you to know which Lead data specifically are available to the Action portion of the Zap. Those are the following:

OK, now we know that the trigger part of the Zap is every New Lead provided by the Convert Forms App. But, what can do with these data? The answer will be apparent by some real world uses cases below.

8 Popular use cases for Zapier

The use cases below are only a few of what you can do with Zapier. However, they are an excellent introduction of how you can connect apps together.

Google Sheets is a tool which is being used by a large percentage of people around the world and because of its familiar interface it still performs as a private database for all kinds of uses.

With a Zap connecting your new Leads with Google Sheets you can populate any Google Sheet you want with all or parts of the data provided by Convert Forms and carry on working with them any way you feel best.

2. Get notified on your smartphone of New Leads via SMS or Push Notifications

For the time being, Zapier provides support for this functionality only for US and UK numbers but there are plans to add more international numbers in the near future.

As far as social networks go, with Zapier you can automatically create a Zap to immediately create a post or a tweet or anything else on any of the popular Social Networks!

An example scenario of this functionality is when you have created a form for a contest and you want to inform your audience through Social Networks that another contestant has entered recently! How cool is that?

Google Calendar is another invaluable part of the Google productivity tools and having it available for any automatic event creation can boost your productivity and efficiency of your workflow.

5. Sync Contacts with your favorite CRM like SalesForce, Zoho or HubSpot

Having a growing business means that you end up keeping tabs on more people than you can ever keep track of. This is when you need a CRM like SalesForce, Zoho or HubSpot.

With Zapier you can connect your Convert Forms with your popular CRM quite easily and end up with an updated list of Leads and Contacts.

The most popular Email Marketing apps have already connected a major part of their functionalities with Zapier. What's exciting with this functionality is the ability to chain multiple accounts of these services and sync your contacts across all of your accounts.

For example, let's say that you have a MailChimp and an AWeber account. You can setup a Zap which subscribes your Leads to both MailChimp and AWeber automatically. You can even do that to unsubscribe a user across all of your accounts!

If you want to have your Leads available through your preferred email service, such as Gmail, Office 365 and Outlook.com, you can easily do that by taking advantage of their integrations with Zapier.

A great example of such a Zap would be having a Convert Form that collects emails of people who want to be contacted personally by you for whatever reason. With a Zap connecting your form and your email service provider this process is incredibly faster and efficient.

8. Create Tasks on Productivity tools such as Trello, Basecamp & Slack

One very popular productivity tool is Trello and it can communicate with Zapier in order to be able to create Tasks with full context.

For example, you can set up a Convert Form to urge your members to submit ideas about your services or products. These ideas will then be siphoned through Zapier and end up in your Trello Dashboard as a new Card or an item in a List.

As you can see, the possibilities with Zapier are endless and with 500+ applications available to interact with each other, it is mostly left to your imagination for what you can do with them.

As already mentioned, because of Zapier's policy about new Apps, the Convert Forms App on Zapier can only be used via an invite. However, it won't be invite-only for long as more and more people use it and this where we need you to start experimenting with this new feature and introduce yourself to an endless world of possibilities.

The latest version of Convert Forms is perfectly capable to already integrate with Zapier which means that you don't have to download anything extra. You can immediately start using by following our guide on How to connect ConvertForms with Zapier. 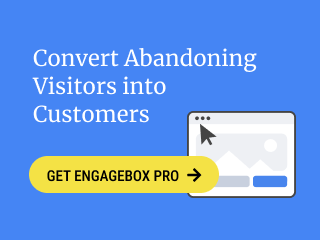