How to load Convert Forms through EngageBox

In this article you will learn how to display a form created with Convert Forms in a popup using EngageBox.

First of all, we need to find the shortcode of the Convert Form we're going to use. Let's see how to do that.

Now that we have the shortcode all that's left is to type that shortcode into our Engage Box editor like it is depicted in the screenshot below and save it! That's it!

It is assumed that you have already published the module of the Convert Form you're interested in. If not, then first take a look at our How to display a form on the frontend documentation to learn exactly how to do that. 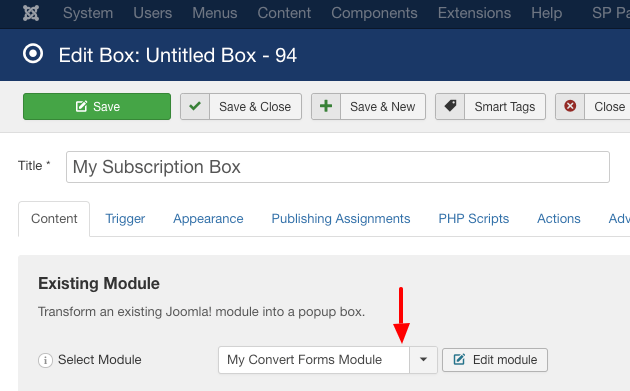 Using a module of Convert Forms inside an Engage Box does not differ in any way than any other conventional module. As seen in the screenshot above, just set the Box Type to Existing Module and right below select your Convert Forms module. That's it!

In case we'd like to auto-close the popup box after a successfull form submission, we'll need to use a small Javascript snippet which closes the popup 3 seconds after the "success" event of the form is fired.

Go to your box > Actions > Click on Add action > On Event and Action select After Open and Run Javascript respectively and enter the code below:

The script above makes use of the Javascript Events API which is available for both Convert Forms and EngageBox extensions.

BACK-TO-SCHOOL
Hurry up! Save 30% with coupon code BACKTOSCHOOL22